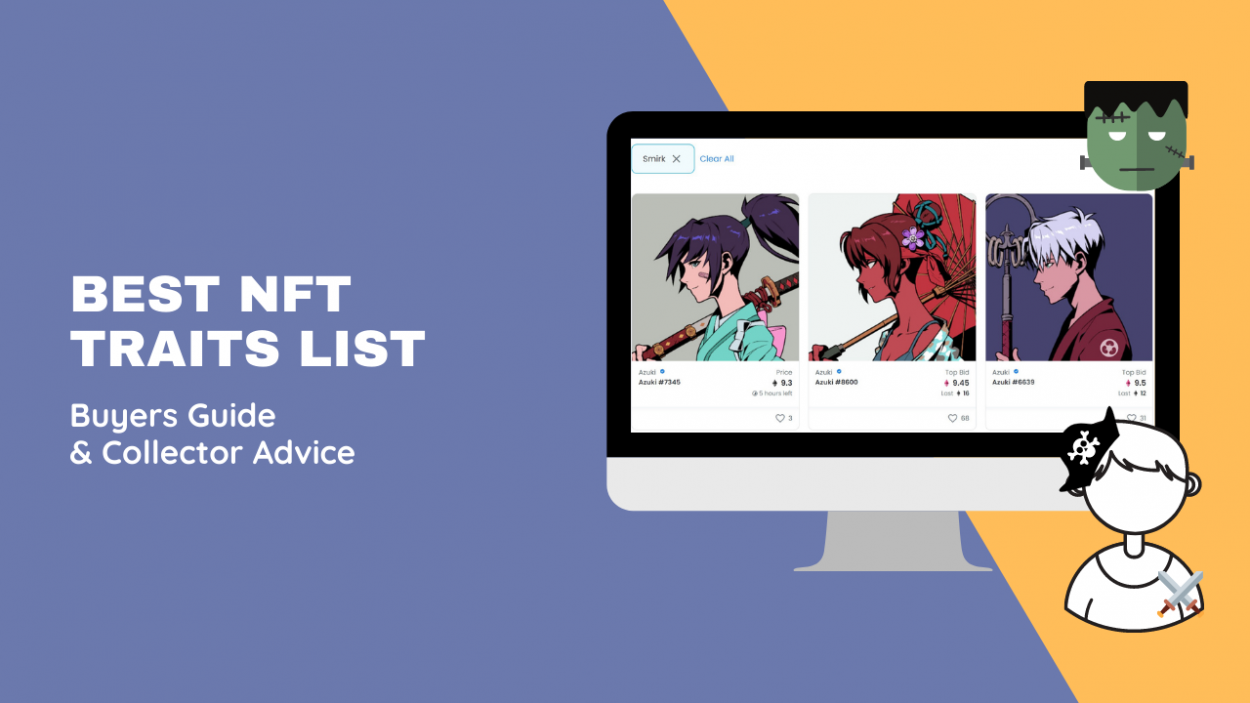 We’ve compiled an nft traits list with fresh ideas and examples you can use when creating your first generative nft project.

Uncover what nft traits are most common or essential to include in your nft collection and how many nft traits you should have for the best results.

First, I will share why these traits are essential in generating a successful nft project.

What are traits for NFT art?

NFT traits are attributes, attitudes, characteristics, or categories used to differentiate a design when creating PFP NFTs. For example, PFP NFTs (also known as profile picture NFTs) represent a person, animal, or objective at first. However, adding these traits adds additional layers to the design, such as clothing, accessories, and facial expressions.

These traits become a valuable aspect to think through when creating your nft project because collectors will look towards which traits are rarest and most valuable.

The more exciting and unoriginal these are, the more hype collectors will have in wanting to collect them. For example, a PFP nft with an ETH earring or chains which make only 1% of all the other traits available could become a reason why the collector buys it in the first place.

Generative NFTs require a list of traits to properly create a design character that’s randomized and unique, creating 10,000 different versions. So, if your base nft was a lion-like Lazy lion, you’ll want to add a trait like ‘hats’ to produce multiple lion nfts wearing different ‘hats.’

How Many NFT Traits Should Be In Your Collection?

Determining the number of traits an nft collection should have is entirely up to you and largely depends on how many different layers or added complexity you’d like to create of your nft.

When analyzing the number of nft traits per collection, we found 82% had 8 Traits, and 88% had 7 Traits suggesting most collections averaged around 6 to 8 nft traits.

The Doggies (Snoop Dogg) nft collection had up to 14 nft traits and was the highest among all the collections we reviewed during the period. While deciding on how many traits you’ll want to have is difficult, consider which traits are essential and add when you want to increase the rarity.

For example, most nft characters require a ‘background,’ ‘head,’ and ‘mouth.’ However, not all require ‘pants.’ We found the least common nft trait was ‘Pants’ unless counting ‘The Doggies (Snoop Dogg)’ collection.

Coming up with enough nft traits for your generative collection can be difficult. So we put together a list of the most common and uncommon traits to help you get some good ideas on what’s worth including in your nft project. Examples include ‘Zombie,’ ‘Robot’ and ‘Bubble.’ Examples include ‘Camo,’ ‘Half Skull,’ ‘Samurai,’ and ‘Diamond.’ Examples include ‘ETH Wings,’ ‘No Hope,’ and ‘Dragon.’ Traits Are Categories for Some NFT Projects

Here are a few examples where an nft trait becomes a way to separate the commons from the rare among collectors.

One of the ones is unique. These types of nfts are one of a kind and created once. Therefore, owning a 1:1 is highly valuable because of how rare the nft is and the demand around obtaining it.

You can find anywhere between 5 to 10 special edition NFTs in a collection of 10,000. It’s a small percentage and makes it.

If you were to collect The Snoop Doggies nft, there’s a unique trait dedicated to Snoop Dog’s favorites, and you can have one of them.

Like a filter, legendary nft traits act as a way to show status and importance over other traits.

Spotlights become essential to show how different an nft can be from others, and that’s the case when it comes to getting a ‘special’ trait nft.

NFT Trait Ideas & Themes: How to Pick Them

Most nft collections revolve around the central theme or incorporate multiple themes into their characters. These themes can be inanimate objects, animals, people, places, and things.

When you combine a list of nft traits with a theme or two, you get exciting ideas for your next nft project.

For example, A PFP nft could be a baseball pirate with mini hoop earrings, black jeans, and bloodshot eyes. Go a step further by making it a 1 of 1, and you have a rare nft others will want for a couple of ETH if done right.

If you’re looking for more nft trait ideas, it’s good to use the following strategies:

Since most NFTs make up a new medium, they can be fantasy, and you can get inspiration from tv shows.

A popular fantasy animation show called ‘Yu-Gi-Oh’ has a card game that makes up over 100 different characters. Here’s a list of Yu-Gi-Oh archetypes which can help introduce you to more traits.

You’ll be surprised how many characteristics and archetypes you could find when planning an upcoming event or birthday party. Take the time to review websites with popular themes.

For example, a kid’s superhero birthday party makes for ‘super hero’s to be an excellent idea for an nft theme.

3. Evaluate Other Collectibles for New Ideas

There is no need to reinvest the wheel to identify what’s working and what’s not. If you find other collectibles, both physical or digital, that make sense, you can include your interpretation.

For example, funko pops are a great collectible, and their mascot ‘Freddy Funko’ has multiple themed figures.

Therefore, Freddy’s Olympics-themed funko pops are an excellent idea for a potential nft collection. Taking it a step further, each nft in the collection could represent all the different sports during the summer and winter Olympics.

Over 33 sports make up the Olympics, and you could build different traits for each nft around each of them.

Why NFT Traits Matter For Creating A Successful Project

Collectors find excitement, pressure, and joy from identifying what makes an nft rare. When collectors can dig into the differences and compare nfts, it becomes a talking point like no other. The hype creates a buzz that sells more nfts and makes them more valuable. When an nft increases in value simply because it has a rare nft trait, others want to join and get a slice of fun.

Taking the time to think through how each nft trait will be different from each other and what makes traits good or bad will add complexity to your roadmap with significant benefits when it comes to selling them.

Think of each trait as a building block that allows new ideas to form and characters to gain a depth that didn’t exist before.

If you’ve enjoyed reading this article on nft traits, you may also like these: DC Fandom NFT Marketplace: How It Works & Why It’s Popular How Long Should You Hold an NFT? How To Increase NFT Usefulness For Project Owners